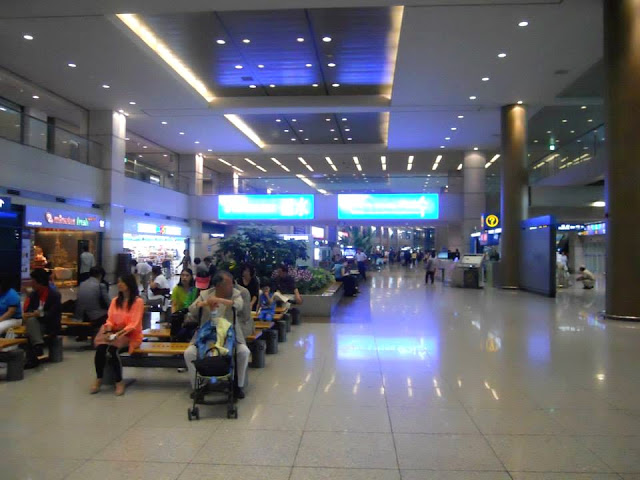 Long time no see huh? I wanted to post earlier but with my final exams at university, my moving out and the organization of my trip, I didn't find the time. Anyway I'm back !

I booked my flight for South Korea. I'm leaving France the 3rd september ! That's so close but I can't realize that I'm really gonna spend one year there. A part of me can't wait for going there and the other part stays relax and wonders sometimes if I could be disappointed (you never know!).

Last week I got my certificate of admission from the CUK and this week I sent my visa application to the embassy. Now I wait for their response but I heard that it's not so difficult to get a visa for studying in Korea. I pray for that everything goes well ! I should get the response next week.

Beside all the boring papers you have to care of when you want to study abroad, I think I'm starting to be stressed about the trip.
I already went to Korea, and I already went to the CUK so you can think it will be easy for me, and I hope so but I think things are gonna be very different from the first time. The trip will last longer yeah, but it's not the only thing.

I met a lot of persons when I went to Korea and I know that I won't meet them again and so on, for differents reason. Ahah here comes the nostalgy ! Hmm never mind, I don't want to complain, I'll be in Seoul next 4th september !!!!! I'm thinking about writing a next post about the friendship in Korea and how I feel it from my french point of view.

Well it was a post for saying nothing, next time I'll continue talking about my former trip in South Korea and, starting from september I will make you discover the things the same way I'll discover ! I plan to make some videos too, keep on following me ! (:

Seo Eri
Posted by Unknown at 2:51 AM No comments: 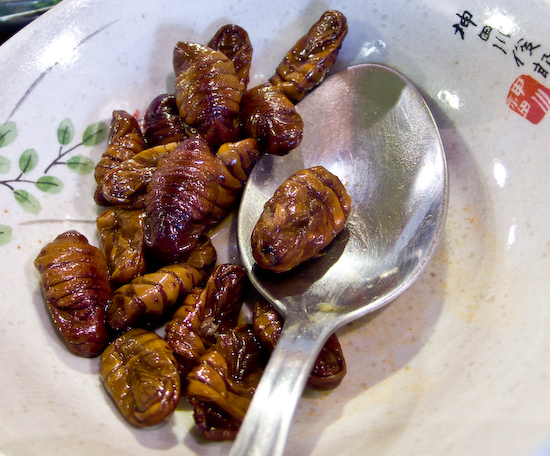 Beondegi. It's an insect. Once I ate sashimis and there were beondegi, side to the main food. To me it's another kind of cultural shock!

There is something that surprised me during this trip in South Korea. The people. I got surprised by the differencies between french people and korean people.
The first day I arrived Korea, when I went out of the subway, a little middle-aged man looked at us, Moryeon, Sarah and me, and said with a big smile "예쁘다 !" (you're pretty*). The next day, I realized lots of 아줌마, old ladies, said that too. They easily came to us and said things like "oh you're pretty ! where are you from? Russia? USA?" and of course we said "no, we are french" and every time, they were very surprised by the fact that we were french. It made them talking to us even more. (I realized soon enough that korean people do like France a lot. Talking to them, I also realized we don't talk to the same France. They have a vision of perfection about my country, that is far away from the truth, but I'll write about it later). Anyway, my point is all those nice persons were middle-aged people, or old people.
In France, I never saw one single old man or old lady talk in the street to a foreigner, tell that he/she's pretty and be interested in the country he/she was from. But I saw young people, my age, do that kind of things.
So my point is exactly : where the hell were young people?
During my first times in Korea, my korean skills were terrible, a disaster. Some times, on the first days, it happened to us to lose ourselves, or to ask for some informations like "hey, do you know a nice restaurant, bar around here?". We asked in english, self-afraid of our korean speaking.
I'll tell now a story who particulary surprised/upset me when it happened. It was something like three days after we arrived. We wanted to go outside and have a drink with the french guys. We were walking on the main street of Yeokgok, when Megan, who is the nicest girl I ever met and that kind of girls that no one can dislike, tried to talk to three korean guys who were standing near to us. First, you have to know that Megan is half-korean, and her korean skills are good. That time, she decided that she would ask the question in korean to those guys. So we went toward them, and when they realized that we were going to talk to them, they almost ran away ! Well, two of them really did at least. The third one, more polite, just stepped back a little but he listened to her. I don't remember what happened exactly then, but I know that he didn't even try to reply to her in korean but english. That day I understood that to some korean persons, foreigners = not talking korean but english.
It annoyed me at that time, really. Thinking about it now... It just makes me laugh so hard ! Remembering their panicked eyes while we were walking toward them and finally running away like cats in front of dogs!
However, and even if I was going to live similar situations later, it happened that we met soon true korean friends. But that will be the topic of a next article !

Seo Eri.
Posted by Unknown at 2:10 PM No comments:

The longest day of my life, waw. 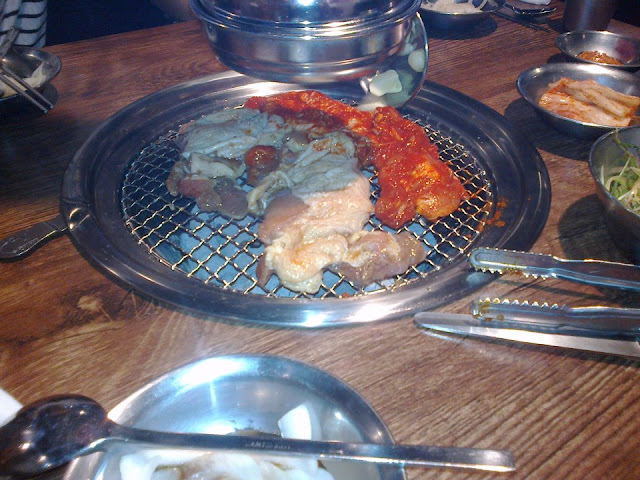 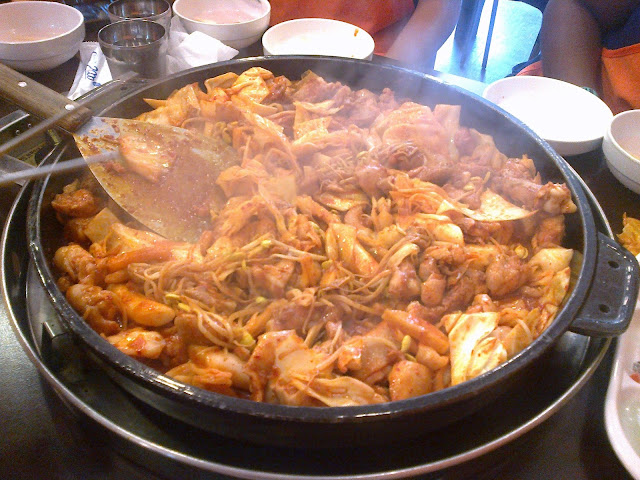 Kinds of korean barbecues. Not the one I'm talking about down here, I couldn't find the right pictures I took, sorry!

I took plane with Sarah and Moryein on May 29 and we arrived the next day in Korea. Thinking about it now I can't remember well what I felt at that time. It was the first time of my life that I took plane, so I guess I was a little bit stressed. From Bordeaux (France) to Incheon Airport, it took 14 hours. I was too excited, I couldn't sleep.
Arrived in Korea, we met a korean girl, Moryeon's pen pal, Gayoung. She went with us from the Airport, to Yeokgok, our subway station, the nearest from the University. When I entered the room where I was gonna sleep in for the next 3 month, I learnt that I was gonna be Megan's roommate. Sarah and Moryeon would share an other room, Oh Anna and Ma Eryeon, and JP, who was the only boy, would have his own room, with no roommate. At that moment I hadn't see a bed for the last 27 hours. However, I wasn't tired. It was a new world to discover and I would have time to sleep later.

On the evening, we met the other french guys from the same french university in order to take dinner. Their plane had arrived some hours before ours, and they were already outside when we visited the dormitory.
We went all together to a restaurant called 구이가 (gu-i-ga), a barbecue.
As you may know, the food in Korea is most of the time very spicy. Although the meat of this restaurant was delicious, I did my first experiment of real spicy food that day. There was a kind of "salad", side to the main food, with some little red pearls in it. Since I was there to discover and try everything, I tried that.
GOD, I never should have do this. Not on the first day, not before getting used to eat spicy things. It was soooo spicy that I lost the sense of taste until the next day. All the evening, all the night, even after brushing my teeth, my tongue was like burned out... That evening I thought "never again"... But of course, since I was in Korea, I was going to eat spicy things again.

After that dinner in restaurant, we stayed outside a little bit longer and finally, all tired because of the plane, we went to bed. I was close to collapse ahah. I hadn't sleep for something like 40 hours.
I never slept so well in my whole life!

My korean university ; The Catholic University of Korea. 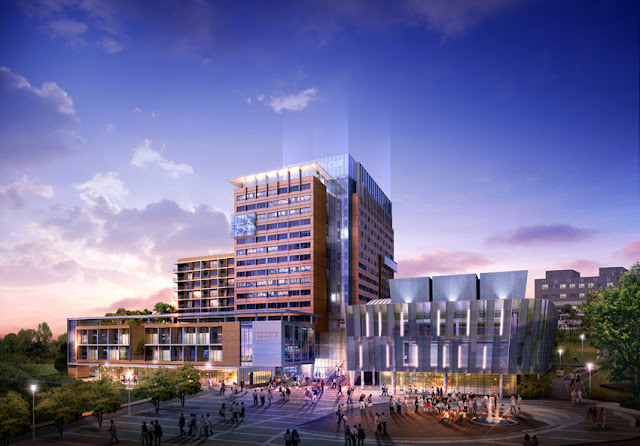 The Catholic University of Korea


Just like I said before, this blog is talking about going abroad. Last summer, I took a summer semester in the Catholic University of Korea (CUK), which, as well as so many others korean universities, offers to foreigners special program, for foreigners, in order to study korean.
Nowadays lots of young people just go to asian countries in order to visit, sleeping at the guesthouse and so on... For my own, to go abroad in order to study was more convenient since I'm studying korean.

Anyway as I said before, lots of korean universities do want foreigners to follow their program. So I entered that kind of program last summer. Last year at the french university my teacher, a great teacher, introduced to us, classmates and me, the foreigner program of the CUK. Even though I was first not interested in Korea, the idea of making a "studying trip" grew up in me and I started thinking about it. Moreover, Sarah, a friend to me, who took both japanese and korean class with me wanted to go there and it was nice to go on a trip with friends ahah.

May the 30th, I and the six other persons of the same university than me were in Korea. There was JP, Megan, Pok Moryeon, Oh Anna, Sarah, Ma Eryeon. It was the start of the trip,and I will write about it later.

Seo Eri.
Posted by Unknown at 2:57 PM No comments:

I went to Seoul. 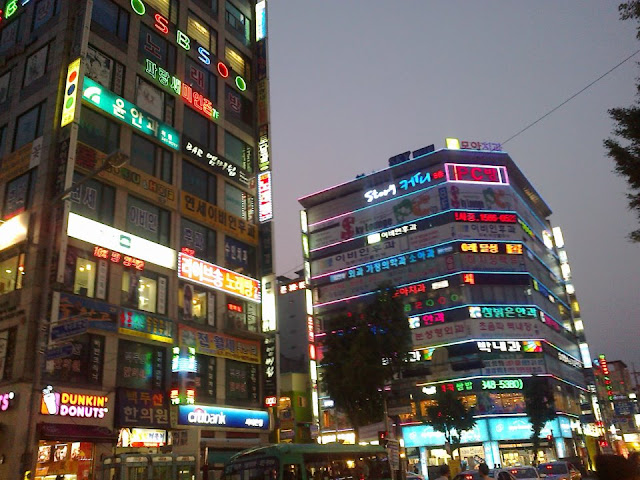 Today, 2013, May the 10th, I decide to create this new blog. I choose to write it into english, even though it's not my mother language which is french. Because I usually speak english when I go abroad, and this a blog talking about going abroad.

South Korea, Seoul. More specifically, Bucheon, a small town near from Seoul.
Let's call me Seo Eri. I'm french, and come from Bordeaux, France. I started studying korean two years ago and went to Korea last summer, from may to august, around 3 months.
The strange thing is that I was not particulary interested in going to South Korea before the first time I came there. I first studied japanese, and because of my friend Sarah who was very interested into korean, started to learn korean too, as an option. My interest finally grew up for this country and soon after I was in Korea.
Well, it didn't really happen this way, but I still can write later about it.

The fact is that, soon, I'll go back to Bucheon, that small town near from Seoul ! After some times, I finally decided to go there again ! And this time, I will stay one full year in Korea.
I'm less than 4 months before the day I go. It's still so far away from me, but I feel like it's very close !

Posted by Unknown at 2:13 PM No comments: